Rail Analysis India Team has conducted a survey, a week ago for taking suggestions of the people on India’s First High Speed Rail Project from Mumbai-Ahmedabad.

Our team analyzed these interesting answers from the people:

Rail Analysis India Team: The Japanese PM is going to Kick off India’s First Bullet Train Project in September, What are your opinions for the same?

Madhu Sudanan : It is a welcome initiative.

Atul Pati Tripathi (A7 Innovations) : It is good to have high speed train services but we need to focus on existing railway infrastructure to maintain safety and security standards.

Julian Bond (Bond5 Associates Ltd) : Technically India is ready, whether the security and land clearance is possible within the time frame is to be seen.

Suhas Ambekar (DONGRE PMCPL) : It is a good omen for the restructuring and redeveloping the Indian Infrastructure establishment, which is the vision of our government. High speed trains will not only reduce the time of travel but also will be effective in smoothly connecting the cities for mutual developments.

S R M Service : Very welcome step. The happiness is such that a dream is coming true. However, mere laying of foundation stone will not help in make the dream happen. There should be a strict time bound completion mechanism of the project i.e. by 2023, even before that. For that a strict monitoring of the project observer or efficient person like E Sreedharan’s has to be called for or any other engineer of his calibre and endorsed by him so that no corruption happens and the project is completed in time or well before time. Otherwise as it is in the past eras of delayed project resulting into cost escalation and giving way for self proclaimed intellectuals who are against of such development in our country to criticize.

Stefan Graf (Amberg) : Great that India starts to get experience in that HS technology and the corresponding way to engineer, construct and maintain it. Rail Analysis India Team:  As India has contracted with Japan for E5 series Shinkansen Bullet train, so what do you think are the facilities to be there in the Bullet Train for passengers?

Atul Pati Tripathi (A7 Innovations) : The new generation E5 series trains are designed to be more comfortable and faster than ever before. It is designed to be a business and luxury car service. It comes with a premium first class seating area, called GranClass.

Virendra Kothari (Alstom Transport) : All current on board technologies including highest level of safety.

S R M (Service) : As per my knowledge, the Japanese version of  E5 may are manufactured without LED TVs  behind each seat of chair/executive class, so the concept of LED panel along with music system may also be added. Initially if it is difficult then too much time should not be wasted, the existing version can be introduced initially and subsequently more changes can be bought. Since the train manufactured by Shinkansen/Toshiba is already equipment with latest equipment’s’ so too  much modifications may not be required immediately.

Phanikumar P (Alstom) : This project will be realised only after 2030 based on need. So we will think at time of realisation based on need.

Rail Analysis India Team: What according to you are the key areas on which government have to focus while implementing the project?

Madhu Sudanan : 24 hrs Secured track free of any encroachments from human or animals for train. It is better if train runs in a cage or tunnel.

Julian Bond (Bond5 Associates Ltd) : Power and security to allow the project to function. Training for staff to a higher level. Technical knowledge and a high level of maintenance and investment.

S R M Service : First and the foremost part of the any technical project of this nature is that time bound completion. Only people with technical background and especially with Railway Engineering service personally should be employed and technical person with Rail technology like the esteemed Shri E Sreedharan should only be the main implementing as well as commissioning authority. The room for red-tapism/beurocratism should never be allowed. Vladimir Finov (RZD International LLC) :  Implement it within the planned timeframe and within the budget.

Rail Analysis India Team: What could be the other corridors for Bullet Trains in India, according to you?

Atul Pati Tripathi (A7 Innovations) : Delhi to Bangalore via Hyderabad Delhi to Ahmedabad and towards Mumbai

Julian Bond (Bond5 Associates Ltd) : Using the freight corridor as a conduit, connect the 4/5 major centres of commerce and industry.

S R M Service : In India almost every young generation wants the uniqueness in the technological marvel in Railways by introducing Swanky High Speed Bullet Trains. So in every region, the young generations are of the view of immediately having such type of Bullet Trains. Recently in a report in the paper “The Hindu”, after having a survey of people who wants Bullet train in Kerala conducted by the State Govt., to the surprise of State Govt. majority of people i.e. 83% of people from the survey wanted implementation of such project without any delay. So this is the change happening in our country. The people have high expectation from present central Govt. headed by dynamic leader Shri Modi and his team can only do and have guts to implement such projects and complete it on time. Japanese E5 Series Shinkansen trainsets will be purchased, with technology transfer to support the “Make in India” policy of government of India. Leave Your Comments Below !

PM Narendra Modi along with japanese PM Shinzo Abe addresses the gathering at the function of Mumbai-Ahmedabad High Speed Rail Project in Ahmedabad.

September 14, 2017 [11:06 AM] : Our railway network is so huge that number of people travelling in trains every week in India is equal to Japan’s total population says PM Narendra Modi.

September 14, 2017 [10:52 AM] : This project will benefit many people including railways, manufacturers, commuters etc. September 14, 2017 [10:29 AM] : PM Shinzo Abe says, i would like to state that India-Japan partnership is special, strategic and global

September 14, 2017 [10:27 AM] : Shinzo Abe on India-Japan partnership said, if we work together nothing is impossible September 14, 2017 [10:23 AM] : Dear friend PM Modi is a far sighted leader,he made a decision of making New India&chose Japan as partner, we completely support it, says PM Abe September 14, 2017 [10:05 AM] : Fadnavis says we are not only laying the foundation stone of bullet train, but also laying foundation of ‘New India’. September 14, 2017 [09:59 AM] : This Bullet Train will be a symbol of brotherhood between people of India & Japan, says Railway Minister Piyush Goyal. According to Mr. Tomohiko Okada, Managing Director, Toshiba India Private Limited, “Toshiba holds significant experience in delivering a high-speed rail system in Japan with its electrical and electronic systems for the high speed-rail, including power supply system and electrical equipment for rolling stock. Toshiba has a unique potential to play a role in realizing India’s plan for high-speed rail projects. With its total solution capabilities in constructing transportation infrastructure, which is indispensable for India’s further economic growth and people’s better life, Toshiba will continue to contribute to the growth of industries FOR THE NEXT INDIA.”

September 13, 2017 [04:57 PM] : PM Modi, Japanese Shinzo Abe will have their dinner at Agashiye terrace restaurant, which is known for its splendid view and kosher Gujarati cuisine. September 13, 2017 [03:25 PM]  : The first formal interaction between the PM Modi and Abe leaders will take place at the Sabarmati Ashram. September 13, 2017 [10:00 AM] : Prime Minister Narendra Modi will welcome his Japanese counterpart personally at the Ahmedabad airport.

September 13, 2017 [09:40 AM] : 15 companies from Japan are keen to invest in Gujarat and likely to be signing agreements with the State government during – the 12th Indo-Japanese annual summit on Thursday.

September 13, 2017 [09:35 AM] : Ahmedabad & Gandhinagar are all decked up, with streets dotted with hoardings and banners of Abe. The visit will begin today afternoon with an 8 km road show where Japanese PM will be accorded a grand welcome. PM Modi will also be present through the road show with Abe. 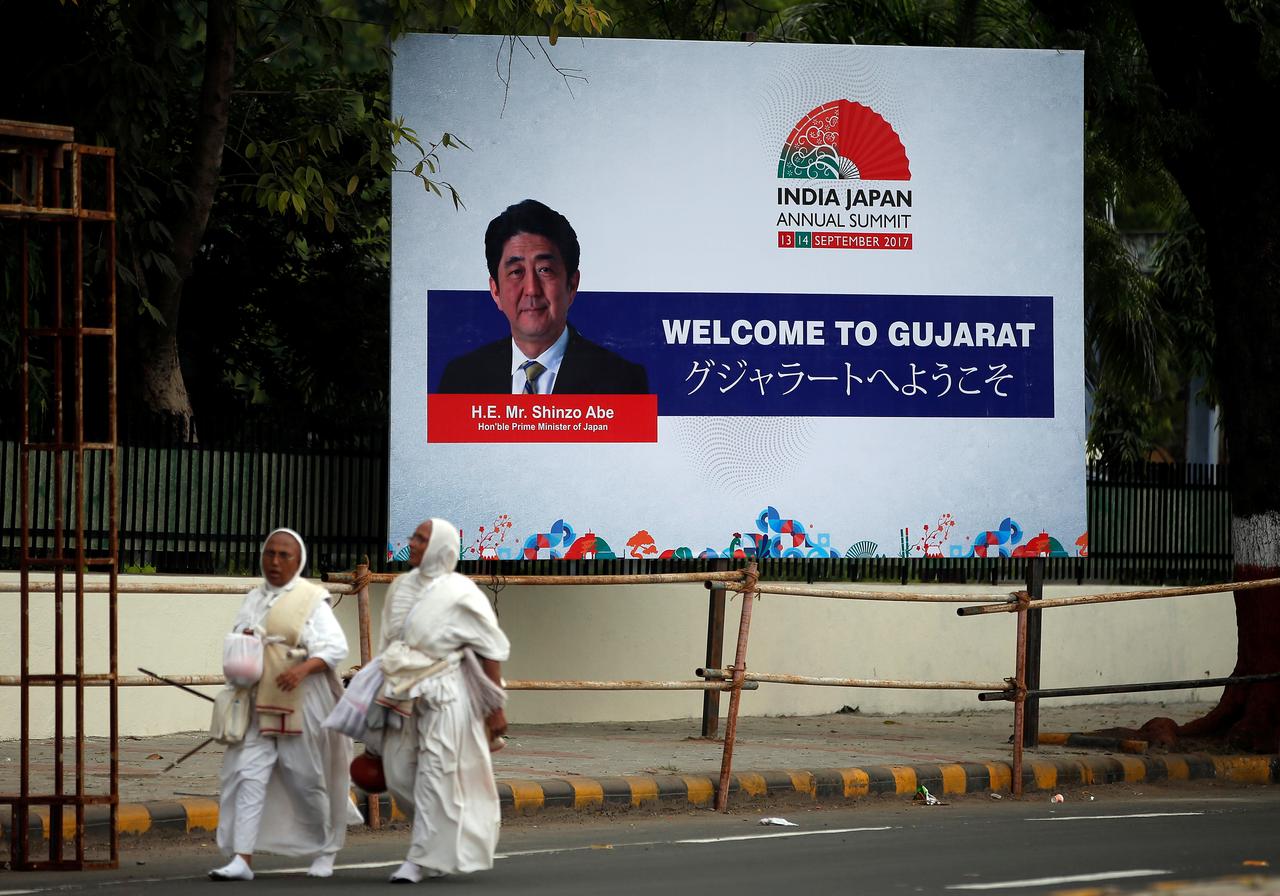 Leave Your Comments Below, If you want anything more in the High Speed Rail Live Updates. We will try out best to provide you the information !